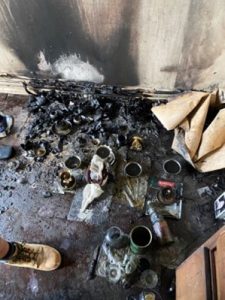 On Tuesday 21st July 2020 a call was received to our office advising us of a fire in a flat on the 4th floor at Garnet Road, Thornton Heath, the call was a result of the sprinkler alarm signalling the call centre.

This is a sheltered housing block and we had retrospectively installed a BS9251 sprinkler system supplied by a tank and pump which was commissioned in December 2019.

London Fire Bridgade attended and forced entry to find that the fire had been extinguished by the activation of one sprinkler head. Another head in the hallway had got hot enough for the cover plate to drop off but not to activate. It appears the resident was using a bedroom as a prayer room and had left the property leaving a lot of incense candles burning, it is assumed that these were the source of ignition.

One of our engineers attended site to replace the head and reinstate the sprinkler system. The system was made live again by 1700 hrs.