On the 5th January at 8.42pm a chip pan caused a fire at a third floor flat at Chapter Highbury II Student accommodation in Holloway.

The sprinkler head immediately activated and extinguished the fire. The fire brigade arrived and managed to isolate the system by 9pm. There was minimal smoke damage and no obvious water damage. Our engineer attended the following day to replace the sprinkler head, fit a new cover plate and reinstate the system back to full operational use

We installed the fire sprinkler system to the 13 storey building in October 2018, protecting all 257 bedrooms, cluster kitchens, cluster corridors and the communal and retail areas.

Another fire was also extinguished thanks to one of our fire sprinkler systems in late December, at a care home in Wales. The fire was caused by an electric scooter, with 3 sprinkler heads activating to control and extinguish the fire. Most fires can be controlled by just 1 sprinkler head, this highlights the severity of a fire caused by the charging of an electric scooter and without the presence of a sprinkler system this would have caused significant fire damage and a risk to life. 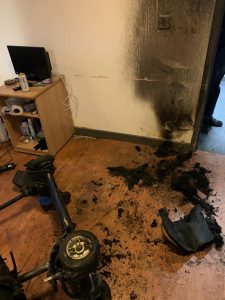