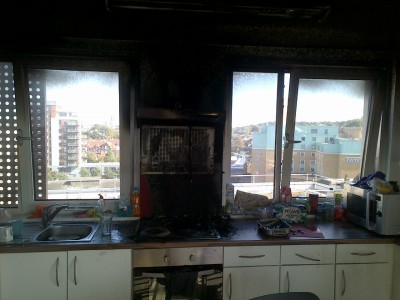 On 4th October at 19:54 hrs, a sprinkler system installed by Triangle Fire Systems successfully extinguished a fire at a halls of residence block in Greenwich.

LFB dispatched 20 firefighters and four appliances to the location and stated ‘The fire started in a communal kitchen on the seventh floor and is believed to have been caused by cooking. Fortunately there were sprinklers fitted in the block which activated and limited the amount of damage caused to the kitchen.”

Around 160 people evacuated from the building before the arrival of the Brigade. London Ambulance Service treated a woman at the scene as a precaution.

A spokesman for the University of Greenwich said: “A small chip pan fire broke out within the Daniel Defoe halls of residence in Greenwich last night. The alarm and sprinkler system were immediately activated and the fire was put out.”

The female student described the flames rushing by her as she was at an adjacent work top, the sprinkler head actuated before she left the room.

Triangle were advised of the fire at 07:00hrs on Sunday morning and Andy Kelleher, Engineering Manager, attended site to reinstate the system and replace a single sprinkler head.